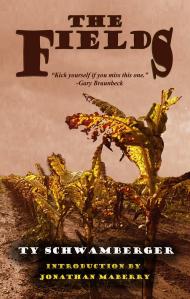 Gothic Readers Book Club Choice Award-winning novella, The Fields, is set to go Out of Print on October 31st. Published by Apex Publications’ The Zombie Feed Press in late 2011, it was released in Trade Paperback & various eBook editions. It was later released in Audio Book by Cup O’ Tea Productions in June 2012 (this edition will remain available after 10/31/13). If you’ve been on another planet for the past two years, and haven’t heard about this very atypical zombie tale, below is the synopsis and blurbs for the novella.

Billy Fletcher learned to farm the family’s tobacco fields – and beat slaves – by the hands of his father. Now, his father is dead, the slaves have long since been freed, and the once-lush fields are dying. Salvation by the name of Abraham knocks on the farmhouse door, bringing wild ideas. He can help Billy Save the plantation and return the fields to their former glory… by raising his father’s slaves from the dead.

Can the resurrected slaves breathe life back into the Fletcher farm? Having brought the slaves back from graves that his father sent them, can Billy be the kind master his father wasn’t? Is keeping the farm worth denying the men the freedom they earned with death?

Billy’s conscience holds the key to those mysteries, but not the biggest one: what does Abraham really want from the former slave owner’s son?

Welcome to The Fields.

“[The Fields]…is part horror story in the classic sense – misdeeds from the past coming back to haunt the present. It’s part zombie story. It’s part adventure. And it’s part social satire in its darkest sense… The story starts with a bite and before you know it, you’ll be participating in a delicious and imaginative feast. Bon appétit!” (taken from the Introduction)

“The Fields is a merciless, pitchfork-to-the-face, homespun zombie adventure.  Schwamberger offers up a shotgun blast of graphic undead action in this unique take on the genre.”

“Ty Schwamberger knocks it out of the park with his novella, The Fields. No sooner do you begin to read, than you realize that the story is much bigger than the words on the page. The setting is timeless, and the horror depicted much more than ghoul and gore. The Fields is a story you don’t want to miss, and Ty Schwamberger is an author to watch, for he just may be headed for the major leagues.”

– Deborah LeBlanc, author of The Wolven

“An intelligent zombie morality tale, unlike anything you’ve ever read before.”

“If Nathaniel Hawthorne had known anything about zombies, this is the kind of story he’d have written.  I’m not joking.  This is some genuine old school horror.  With The Fields, Ty Schwamberger has given us a crime so horrendous it’s impossible to look away.  The sins of the father.  A deal with the devil.  It’s all here.  And Schwamberger makes it look so frustratingly easy.  This is one hell of a good story.”

– Joe McKinney, author of Dead City and Apocalypse of the Dead

“With The Fields, Ty Schwamberger did the near-impossible:  made zombies interesting to me again.  Not only interesting, but frightening, as well.  Throw in more than a dash of scathing social commentary, a pace that never stops to catch its breath, and a sly bit of gallows humor, and you’ve got a winner. Kick yourself if you miss this one.”

– Gary A. Braunbeck, Bram Stoker and International Horror Guild Award-winner, author of To Each Their Darkness and A Cracked and Broken Path

“Ty Schwamberger’s The Fields is an original zombie tale that will satisfy lovers of grisly fiction and well told stories. Good characters, cool twists and great writing make this a story that grabs one by the scalp early on. Anything with a Southern vein and the specters that can invoke gets my slash of approval.”

“The walking dead, a post Civil War setting, and a sinister Lincolnesque figure add up to a fresh new take on the zombie mythos.”

Go check out the book trailer, then head on over to Amazon to pick up this soon-to-be Out of Print zombie novella.