This is truly a special contest.  Let me explain.

As many of you know (or can tell) my favorite horror author of all time is the late, great Richard Laymon.  You can visit the Richard Laymon Kills website, by clicking here.  His books inspired me to start writing, again.  Sure, I dabbled with a poem or a short story here and there throughout the years, but didn’t become serious about being an author until I read my first Laymon book.  From that point, I knew I wanted to ultimately write for a living (still working on that part) and that I wanted to read every peice of work that he ever wrote (to which I own almost all of his novels).

Because of my admiration for his work, in April of 2008 I contacted his wife, Ann, and told her how much I enjoyed his books and that I considered myself I lifelong fan, after the first book I read of his.  Since that time, Ann and I have stayed in contact.  She is kind as can be and has wished me luck with my own writing a number of times.

Having said that.  About a month ago, Ann and I started discussing the idea of a ‘Richard Laymon book contest’.  One of the ideas behind the contest was, of course, to bring new fans to my site.  But, more importantly, it was a way to give back.

As I said, it was Richard’s work that made me want to really buckle down and start writing, again.  So, I figured, if it helped me, why wouldn’t it work for someone else, as well.

So, the idea was born.

A ‘Richard Laymon book contest’ that would not only bring new readers to my work, but also to his as well.  Perhaps a new horror fan that hasn’t heard of Laymon before and but reading one of his books, will want to go out and…buy them all!

Basically, the contest works as follows.

Every so often I will post a ‘new’ contest featuring a book that Ann was so gracious to send me.  I will tell you alittle about the book and untimately how to win it.

So, having said that…here is the current contest. 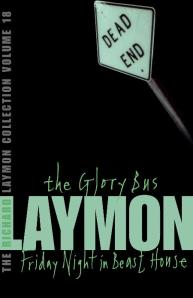 YOU COULD WIN…  The Richard Laymon Collection, Volume 18.  Which is a double-book containing The Glory Bus (published as Into The Fire here in the U.S.) and Friday Night in Beast House.  This was published by Headline (in the U.K.) in July 2008.

The description of the double-book is below.

One moment Pamela is a contented newly-wed with a loving husband. The next, she’s the prisoner of a repulsive killer who has lusted after her since high school.Somehow college kid Norman finds himself in a car with hell-raiser Duke and a strange hyper-sexed hitchhiker who tags along for the ride. Together the lawless pair take him on a wild journey that soon becomes a living nightmare.

The last novel in the Laymon’s BEAST HOUSE series. Michael would do anything to get a date with Alison. She has just one condition he has to spend a night with her in the legendary Beast House. To Michael a night alone with Alison is a chance of a lifetime but if the stories about the Beast House are true it may also be a chance to die…

As you can imagine with Headline being a company based in the U.K. these books are extremely hard to come by.

Send me an email (ty_schwamberger@yahoo.com) with the subject line, ‘Richard Laymon Book Contest’ and include your name, mailing address and why you love the horror genre.