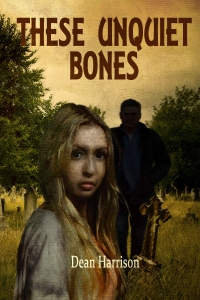 These Unquiet Bones by Dean Harrison

Trying to get behind the truth of her mother’s death, Amy Snow unleashes the skeletons lurking in the dark of her father’s closet, and learns a terrible, twisted truth about her family tree. Meanwhile, a man named Adam is on a mission to restore Paradise to its former glory. To accomplish this, he must find “The Lost One”, a girl he calls Eve, and sacrifice her to the god she betrayed the day a talking serpent slithered into the Garden of Eden.

Dean Harrison is a longtime fan of horror fiction. Though he has spent some time out in the “real world” working as a shoe salesman, a security guard, an investigator, a loss prevention detective and a journalist, he has consistently returned to what he loves doing most–writing horror fiction. His short stories can be found in the horror anthologies FEM-FANGS, FELL BEASTS,  RELICS & REMAINS and CHRISTMAS IN HELL. His debut novel is THESE UNQUIET BONES. More is to come.

Dean lives with his family in his hometown of Mobile, AL, a city rich in ghost stories.

Learn more about Dean and his work on his website.

Available in Trade Paperback and Kindle on Amazon.